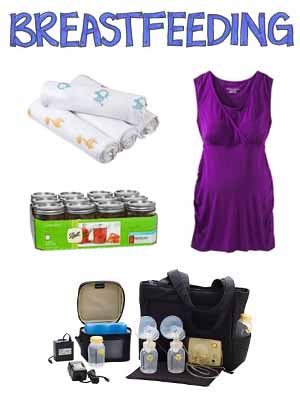 I don’t know why, but from the moment I found out I was pregnant, I was determined to nurse my kids. I think it may have had something to do with watching my mom nurse my younger siblings and I’m sure it was partially due to my knowledge that it’s believed to be at least somewhat better for the baby (and mother). However, I think the main reason I wanted it to work out was just the imagery that had been planted in my brain at some point during my life of a mother gazing fondly at the face of her nursing child. Somehow statues, paintings, and photographs I had seen depicted this as the purest form of love and inner peace I could conceive.

Imagine my surprise when confronted with reality following the birth of my first child. I feel like the joy of breastfeeding is the biggest lie ever propagated about the whole process of childrearing. I’d read the books, which said things like: “Expect some mild discomfort initially” and “Breastfeeding shouldn’t be painful. If it is, you’re doing something wrong. Seek help.” Well, let me tell you, it hurt. A lot. I would rather go through unmedicated childbirth again than relive the first few weeks of breastfeeding. I went to Well-Baby clinics to meet with lactation specialists that watched me nurse and weighed my baby before and after each nursing session. Rather than easing the pain, they decided that my baby wasn’t getting enough milk, so they had me using a supplemental nursing system when my son was a week old. Then not only did I have to deal with the physical pain of nursing, but I had to learn the excruciating art of pumping and deal with the psychological trauma of not being able to adequately provide for my newborn. Eventually, the lactation specialists told me that I was doing everything right (hold, latch, nursing frequency, etc.), but that sometimes it just hurt and there was nothing I could do about it, but wait.

The books say that any pain should subside within 6 weeks. It was probably the longest 6 weeks of my life, but gradually the pain did decrease until approximately 6 weeks and 1 day, when I was able to breastfeed without any discomfort. By 3 months, we were professionals. My son could nurse upside down and backwards while playing with a toy and I could read a book and drink iced tea simultaneously. We were able to have all the loving moments I’d imagined, it just took us awhile to get there.

When I become pregnant with my second child, I was still nursing my son, who was slightly over a year at that point. I learned a couple important things from this experience. 1) After I was a few weeks pregnant, nursing started hurting all over again. And 2) After I had the baby, I went through the same period of soreness as with my first child. What this tells me is that anyone who says “If it hurts, you’re doing it wrong,” is straight-up, flat-out lying. You MAY be doing something wrong. If there are physical wounds and bleeding, that’s a pretty good indicator that your technique needs some work. However, you may be doing everything exactly right, and for some biological reason I can’t even begin to comprehend, it may just hurt for a while. Fortunately, the pain was less with my second child than with my first and didn’t last as long.

Having suffered more than I expected to make nursing work, was it worth it? For me, yes. Resoundingly, absolutely, unquestioningly yes. I can’t even begin to describe how convenient it was to (eventually) be able to nurse my baby anytime, anywhere with absolutely no effort. With my second child, I literally never had to do more than sit up at night since we co-slept, and I barely ever had to do that. Usually, I would just roll-over, attach her, and go back to sleep. Anytime there was any sadness or stress in my children’s first year, I had a magical way to instantly make everything all better. “Nummies” soothed all cares, worries, and discomfort. However, the main reason I’m glad I nursed is for the reason I dreamed about during my first pregnancy. In those moments when my wild, screeching monkeys would snuggle peacefully in my arms and lock eyes with me as I held them close and gazed at their sweet, relaxed faces, I would feel the purest love that I could ever imagine one human being feeling for another.

Click here for more articles on Life with a Baby.