This is a funny, original, unique book which might confuse younger children, but will definitely be enjoyed by kids in kindergarten and early elementary. My 6 year old thinks it’s laugh-out-loud hilarious (and so does his 4 year old sister, though she’s definitely following his lead to some extent). 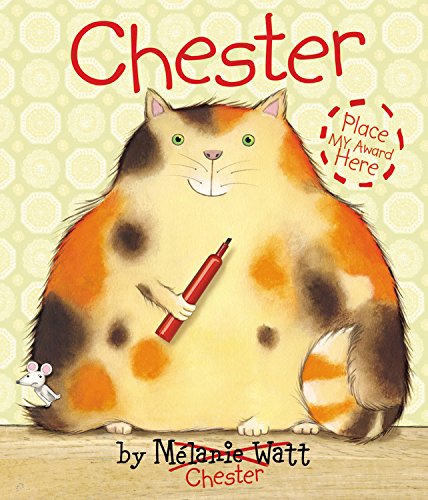 Comments: It’s been awhile since my oldest child (6 years) has requested the same book over and over again for days on end. However, this book has been not only on the bedtime lineup for a week now, but he also frequently wants me to read it to him first thing in the morning as well. The main idea behind the book is that the author, Melanie Watt, is trying to write a story about a mouse, but her cat, Chester, keeps using his red marker to change the story and add in his own comical contributions.

The funny thing is that I remember checking this book out from the library a couple years ago and trying to explain it to my then-4-year old son. At the time it didn’t make much of an impression. However, after recently going through what was happening on each page slowly during the first reading, my 6 and 4 year olds both currently love it. My 6 year old is definitely the biggest fan. We’ve read somewhat similar stories before where a character seems to influence the development of the story while it is unfolding, such as Interrupting Chicken and There is a Monster at the End of This Book, but there is something slightly more sophisticated about this rendition.

Maybe it’s the back and forth dialog and interaction between Chester and the author, maybe it’s the sassy misbehavior of the cat…whatever it is, my kindergartner has not yet gotten over the novelty. While he didn’t care for it much as a 4 year old, his 4 year old sister also loves it, though I’m guessing she’s influenced by her big brother. I was impressed that after listening to it twice, she was able to tell my husband the author’s name when he was reading it to them. If you check it out, be sure not to skip Chester’s revision of the dedication. That is probably my kids’ favorite part.