My 5 year old and I are completely in love with this one-player game. What a great way to get kids to exercise their brains and learn to face a challenge. 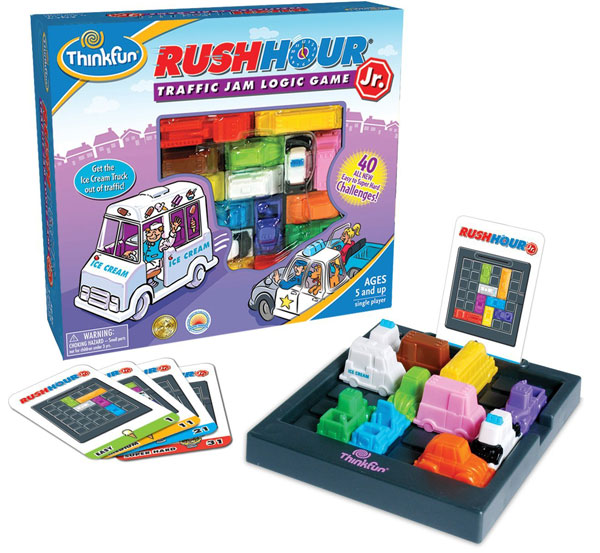 Comments: I am so excited about this game. This is the sort of toy which I would have loved as a kid. It’s really more of a brain-teaser than a game and it’s something that’s meant to be played alone. I think this is the perfect toy to get kids to learn to love a challenge, which is such an important life skill. It’s not trivially easy, but also not so hard that it’s immediately frustrating. I really want my children to learn to keep trying when things get hard, so I’ve been looking for lots of these types of independent puzzle games which we call “challenges”. We have several, mostly by the company SmartGames. We like those ones too. However, Rush Hour Jr. is by far the biggest hit.

In terms of age ranges, I think this is a good game to start with if your child is under 8. I introduced my child to this game when he was about 4 and a half. He was able to do the first puzzle right away, which was a boost to his confidence. By the time we got to the medium ones, he started to have more difficulty. Although he didn’t think so, I thought this was great, because the purpose of the exercise from my point of view was not to teach him how to solve the puzzle quickly, but to get him to learn that it’s okay not to be able to do something. I wanted him to learn to keep trying and not get frustrated, because even if he couldn’t figure out the puzzle today, one day he would be able to do it if he just kept working on it. By his 5th birthday he had made it to about card 16 out of 40, which he was able to solve after working on it for about 10 to 15 minutes at a time over 3 days. This persistence is exactly what I’m trying to foster. However, at that point it was clear he had reached his limit. His frustration was clearly starting to outweigh his enjoyment, so we put it away for awhile.

Now at nearly 5 and a half, he’s done about half the deck and I’m sure we’ll work our way through it over the next year or two. Whenever he’s ready, we’ll happily buy the non “junior” version of the game. I don’t think a parent should be reluctant to start their child with this junior set. While I haven’t seen the older kid version, the puzzles in this set are not trivial. I’m sure all kids will have different abilities and different levels of cards that give them difficulty. The nice thing is that I can almost guarantee that this set includes the full spectrum: cards which will be easy to teach them how to play and boost confidence as well as cards that are so hard they will struggle quite a bit to complete.