This is an entertaining game for families with kids 5 years and up. It’s one of the few games I really like to play with my kids. Catan Junior teaches many useful concepts such as abstract math through the acquiring and trading of resources to purchase pirate ships and lairs. It’s also a good first introduction to strategy, requiring the child to make decisions at every step of the game. 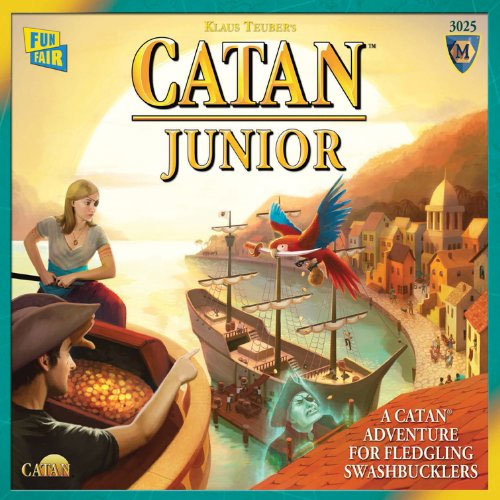 Comments: My son received the game Catan Junior for his 5th birthday about 6 months ago. During that time, we’ve probably played it 8 to 10 times. The box says it is for kids 6 and up, and while it is probably the most “grown-up” game my son owns, I think it is perfectly fine to play with younger kids (though the youngest kids will obviously need help). At 5 and a half, my son is good at remembering the rules and what needs to happen all on his own. He’s not that great at strategy yet, but I think he’ll figure out that his decisions have consequences naturally as he gets older and as we play more and more.

What’s nice about this game is that it is appropriate for a wide age range. Unlike many kids games, this one is fun for grown-ups. My 3 and half year old is able to play with us as well, though really she needs step-by-step instructions on what to do at each point of the game. Honestly, she seems a little bored by this one and would probably rather play something else, but she is not the target audience and it’s nice that we’re able to include her instead of telling her she’s too young. I’ve played this game with 5, 6, and 7 year olds and they all had a great time.

Catan Junior is also great at subtly teaching useful concepts without being obviously educational. For example, it teaches abstract math and value concepts by having certain assets (like ships and lairs) that you can buy with resources that you earn (like molasses and gold). It also involves the use of a card that has algebraic type formulas. For example, one ship = one goat + one wood.

It teaches strategy in the number of decisions that need to be made at each point in the game. Do you want to trade any of your resources? Do you want to purchase any additional resources from the stockpile? Is it worth taking a chance and purchasing a wild card or should you just spend what you earn on purchases that will bring you directly towards your goal? Once you buy a ship or a lair, where will you place it on the game board?

This game is not simple by any means. Even though we’ve played this game nearly a dozen times, if it’s been more than a month since the last time we played, I always need to read the directions again to remember all the little subtleties of game play. However, it’s not so complicated that I need to keep the instructions next to me while we play. The rules are a bit complicated, but they are also fairly logical, so once you are reminded of what to do, the game progresses naturally.

I should also point out that this is a fairly long game. It’s not Monopoly long by any means, but game play really does take 45 minutes to an hour, especially including set-up. We can only play this game during the toddler’s naptime as he is still the sort that would eat the pieces when we weren’t looking and just generally cause destruction when he wasn’t ingesting pirate ships. As a result, we only get to play this game once in awhile, but my 5 and half year old always thinks it’s a special treat whenever we do.