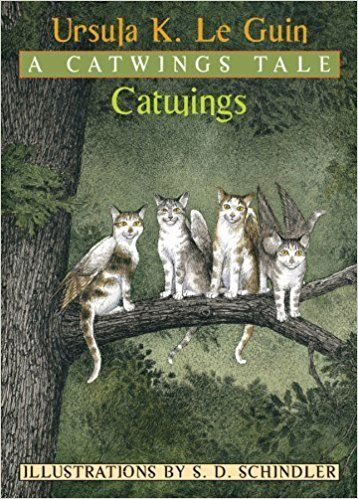 Comments: I just finished reading this book to my 4.5 year old and I think it was a good book for his age. It’s strange, though, because on the one hand, it was way shorter than I was expecting (only four chapters long). However, while the plot was very simple, the language was a little bit advanced and the chapters were slightly longer than what we’ve been reading. Each chapter took about 10 minutes which is about the limit of his attention span at the moment. I had to do a little bit of explaining here and there to make sure he knew what was going on, but he says he liked it. After we finished he said, “Let’s read the whole thing again right now.” I know he doesn’t have the attention span for that. I told him there were other Catwing books we could get and he enthusiastically agreed we should get more.

(I should also say that I absolutely love the young adult and adult books by Ursula K. Le Guin. The Earthsea books were among my favorites in high school. Honestly I wouldn’t have known this was written by her if her name wasn’t on the cover, but I’ll admit I’m more inclined to like this book, because I’m a fan.)