I don’t know why, but I’m always surprised when I read a parenting book from decades ago that I find really insightful. It’s not like modern parents have a monopoly on good parenting skills. I recently found an inexpensive copy of Parent Effectiveness Training, which was originally published in 1970. It had so many great, new-to-me ideas that I kept making my husband stay up late so I could read sections to him. 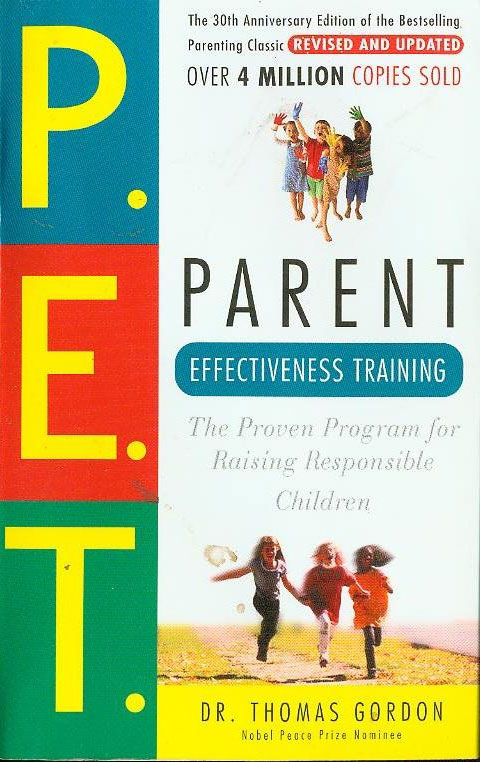 Review: The main premise behind Parent Effectiveness Training (P.E.T.) is that parents should never have to use their power over their children. Parents should be so effective at parenting that they will not need to use threats, bribes, or other coercive measures. The parent-child relationship should be based on mutual respect. As a result, kids will (supposedly) not go through the typical teenage rebellion stage where they pull away from their parents and parental authority.

What I love most about this book is the very analytical way the book looks at kids’ behavior. It basically says that all behavior can be classified into two bins: acceptable and unacceptable, problem or no problem. If there is no problem, everyone is happy. If there is a problem, the parent needs to determine who the problem belongs to: the parent or the child.

Examples of a child-owned problem are misplacing items, problems with friends, or not making a sports team. Many times, parents get involved in children’s problems by trying to solve them or distract them. Instead the author claims there is only one appropriate response to situations in which the child owns the problem. This technique is called active listening. If the child tells their parent about a problem, the parent should basically repeat back what the kids say, using new words, to try to make sure they understand the child’s feelings and underlying message.

The first day I read this, my husband and I decided to try it almost as a joke. We made an agreement that when our kids were having a problem, we would just parrot back what they said. The next day I read that we are definitely NOT supposed to parrot. Instead the parent needs to rephrase the child’s words. However, I have to say that even the parroting went pretty well. A child would come to us saying “He stole my toy!” We’d give them all our attention and parrot back, “Oh no! He stole your toy!,” they would look at us slightly confused for a moment, say, “Uh-huh,” then walk away to go play somewhere else.

I think at first, they may have just been confused by our odd behavior, but we’ve both been making an effort to use the technique correctly with our kids for a couple weeks now and I can see a real difference. It turns out a lot of the time kids do not want us to solve their problems. They just want us to listen to them and understand what they are saying and why they’re upset.

In the second case, the parent owns the problem. This involves behavior like kids not picking up their toys, interrupting, or being too loud. In this case, the author recommends not using active listening, but instead sending “I-messages” that center around how the parent feels. For example, instead of saying, “YOU are a lazy slob” the parent should say something like, “I feel frustrated that our house is so messy.” In this way, you don’t blame or shame the child, but instead give them the opportunity to solve the problem on their own.

In order to send an effective I-message the parent needs to describe the behavior, how the parent feels about the behavior, and convey the effect the behavior has on the parent. One example given in the book is when the child is late coming home, the parent should say something like, “When you didn’t call to say you would be late, I was worried. That distracted me from my work.” Many times, in trying to come up with the third piece of the message, parents realize that there is no tangible effects and as a result, the unacceptable behavior will seem slightly less offensive.

Even after active listening and sending I-messages, there will be times when the parent’s and child’s needs are in conflict with each other. Rather than the parent giving in to the child or forcing their own solution, in which case there is a winner and a loser, the author recommends committing to finding a “no-lose” solution in which both parties can live with the agreement. The author gives lots of detailed tips on how to work your way through this process to find a creative solution.

So far, I’ve tried this a handful of times always with at least some degree of success. A few weeks ago, I tried this with my oldest son’s piano practice. I want him to do piano. He wants to have enough time to play and do fun stuff and feels like piano practice interferes with his priorities. After active listening to his feeling and sending my own I-messages, we came up with an agreement in which if he gets his practice done (no matter how much he complains or messes around), my husband or I will play a game of pool with him. We’re going on 3 weeks, and he’s so happy to play pool that not only is he getting his practice done, but the complaining and messing around have decreased significantly.

What I didn’t learn from this book was how to deal with my kids flipping out in public when they don’t get what they want. For example, if we need to leave someplace fun and one of my kids REALLY wants to stay. In that case, we clearly both have a conflict, but it doesn’t seem like the right time to try to find a “no-lose” solution. In those cases, I end up reverting back to using my parental power by making some sort of threat or bribe to get us out of the situation.

I’m also not sure what to do when my kids have conflicts with each other. Sometimes my active listening to both of them doesn’t seem to be enough. In that case, I also end up forcing a solution (which usually involves time-outs for both of them when I get fed up enough). In the couple instances when I’ve tried to take the time to help them find a no-lose compromise, I’ve been very pleased by the good attitudes and feelings that come after, but it’s hard to find the time to do that for the multitude of mini-conflicts that occur throughout the day!

I know I’m not a perfect parent and never will be, but I really feel like this book has given me an ideal to aim for and the tools to help me get there. I like it so much, I’ve ordered the sequel, P.E.T. in Action, from 1975. I’m eager to glean even more wisdom from this author. (Personal Rating: 9/10)