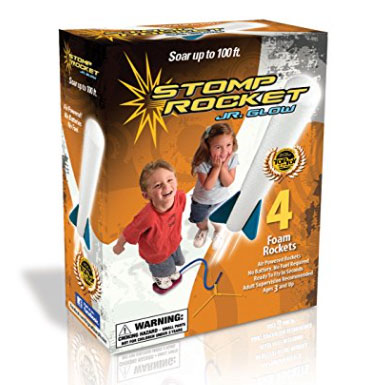 Comments: My son just received this for his 4th birthday and everyone in our family has had a lot of fun with it. We haven’t even taken it outside yet. It took about 5 tries for the 4 year old to be able to do it by himself, but now that he can, he loves making it whack into our ceiling. I don’t know if it can reach 100 feet as it claims, but I believe it based on how fast it’s going when it’s hits our 20 foot ceiling. I think the primary difference between this and the original non-junior stomp rocket is that the “rockets” in this junior addition are completely foam and unbreakable (and also very unlikely to break anything or hurt anybody). Our 2 year old also really likes this toy, but she’s not heavy enough to effectively stomp the rocket and not coordinated enough to jump on it by herself like her brother. However, with a parent’s help, she can be effectively “dropped” on top of the launcher such that she makes it go, which she thinks is hysterical.

Update: I’m taking this off the list of best gifts for 4 year olds, though we do still enjoy playing with these rockets, particularly in conjunction with Fort Magic creations. However, it does not appear to be as long-lasting as I would have hoped. Kids play rough and several of the blue fins have fallen off and needed to be glued back on. It’s not really a huge deal, and I still think this is a great product for the price, but it’s not the sort of thing I’ll be saving for my grandkids.