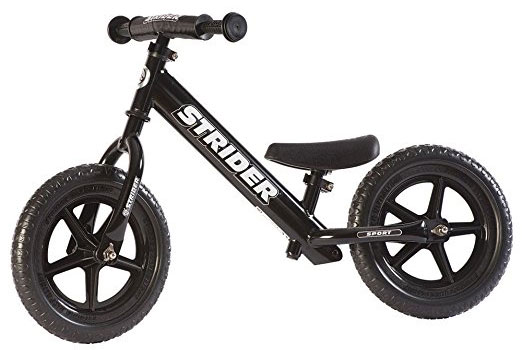 Comments: My 4 year old son has been riding his friend’s Strider bike occasionally since about his third birthday and he loves it. However, we decided to buy him a bike with training wheels for his 4th birthday instead of a Strider, because we thought it would be more economical, since the training wheels bike should last longer and is less expensive. Unfortunately, while he liked his “real” bike with pedals for a couple days, he tipped the whole thing over once by turning too sharply which has dampened his enthusiasm considerably. I wished we had just bought him the Strider instead. To fix our mistake, we bought our daughter a Strider for her 2nd birthday about a month later. She can “use” it, but she mostly just walks and refuses to sit down at this point. However, she’s happy to let her older brother use it most of the time and he’s barely gotten off of it for three days. (We let him ride inside as well as outside as long as he doesn’t run into things.) He’s improving so rapidly, that I don’t think he’ll need it for very long, then it can be passed down to his younger siblings when they’re ready. My daughter, at 2, might be too young to take full advantage of the bike, but I think it would make a great gift for a 3 year old. My friend’s 5 year old has been riding a real bike without training wheels since before his fourth birthday, which she attributes entirely to having a Strider when he was younger.