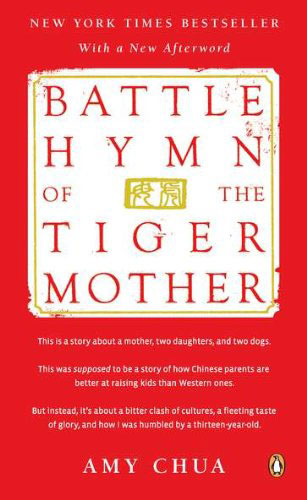 Review: I read this book immediately after reading the French parenting Book, Bringing Up Bebe. The differences are striking. While the French learning philosophy is all about giving children opportunities for awakening and discovery with no real forced learning, the Chinese philosophy is the exact opposite. Even from toddlerhood, kids are expected to spend practically every waking minute in structured education of some form or another with no real choice in the matter.

I know this book was heavily criticized when it came out, and although I’m more in favor of the French teaching philosophy, I actually really enjoyed the book. The main idea is that, in general, kids will not push themselves to do something difficult, because no one likes working hard. By not giving their children a choice, Chinese mothers do their children a favor, because they acquire skills and talents they would not otherwise have if left to decide for themselves.

As they master different skills, they receive praise and then the parent, in theory, should no longer have to force them to work hard. While the author is admittedly an extremist when it comes to applying this principle, the idea is interesting. They may not like their parents when they are young and may hate being forced to work harder than their friends, but after many successes the children are in general grateful to their parents and maintain a lifelong relationship with them.

While the Chinese parenting philosophy “works” beautifully on the older of the author’s daughters, it backfires on the younger daughter who becomes rebellious as a preteen and early teenager despite all her mother’s efforts. After one final incident, the mother wisely decides to give in rather than ultimately sacrifice her relationship with her daughter and lets the daughter decide her life for herself. The end result is that she has two happy, hard working, talented children who seem to have a sincerely strong, though somewhat atypical, relationship with their mother.

While I know I could never be a Chinese mother, this book is a good reminder that as parents, we know better than our children, and it is okay if they don’t like us for awhile when we do what we believe is in their long term best interest. However, it also teaches us that ultimately, we can’t control our children and they will either obey or rebel of their own volition.
(Personal Rating: 8/10)