I don’t think I can overstate how valuable this book has been for my 7 year old. We all want to raise critical thinkers. We want kids who don’t give up when they encounter a challenge. Instead of shutting down and complaining, “This is too hard,” we want them to say, “This is tough, but I’m going to keep trying until I figure this out.” This fun detective book filled with cases to solve has done that for my 1st grader. 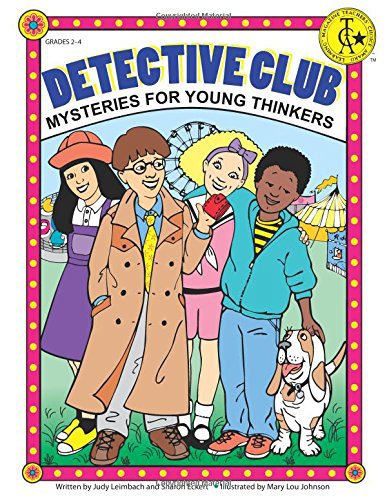 Comments: I remember being a kid and doing a book of logic puzzles that my grandmother had given me. I specifically remember one long road trip when I finally got to the section of the book, where I could no longer complete the puzzles. I would carefully go over and over the clues, trying to decipher what it was that I was missing. If I managed to complete a challenging puzzle, I was so proud of myself. If I wasn’t able to do it, I don’t remember getting frustrated. I would just keep trying. If that still didn’t work, I’d move on to the next puzzle and complete what I could do.

I REALLY want my kids to know the pleasure that comes from working on challenging problems, even when you can’t solve them quickly and easily. It makes the satisfaction once you finally succeed that much greater. Not to sell out my 7-year-old, but he’s not known for relishing a difficult problem. Most things come pretty easily, so when something is hard, he tends to immediately get frustrated and grumpy.

This detective club book is starting to change that. It’s meant for 2nd to 4th graders, so he’s on the young end of the target audience. He can’t read all the words, so I help him out with the reading, but I let him think about all the clues. In the beginning of the book are a few mini logic puzzles to see if you’re “ready to be a detective”. We did those together, so that I could show him how to use the provided grid to solve the problems. However, ever since he’s started working on the cases, he’s been on his own (aside from the reading) and he’s doing great.

Each case has 3 or 4 different sets of clues so that the child is guided towards solving the mystery in stages. Many of the puzzles are the grid shaped logic puzzles like I did as a kid, but some are completely different. All involve critical thinking and using clues to figure out the most likely suspect in a case. (If logic puzzles intimidate you, don’t worry! Each case comes with a very thorough teacher’s guide.)

My first grader LOVES Detective Club. If it were up to him, he’d try to solve a case in a single day. I’ve been making him spread it out over at least 3 days since there are only 6 cases in the whole book. Since we’re almost done with this book, thankfully there’s a follow-up book called More Adventures of the Detective Club.

One of the nicest things about this book is that it has completely changed my son’s attitude about math. I love math. My son…not so much. Next year I’m hoping to try something more fun and creative when it comes to math, but since I have a baby, we’re just doing standard, repetitive math workbooks this year and he’s not a fan.

Whenever he works on Detective Club, I tell him he’s doing math. “How is it math?” you might ask. There aren’t even any numbers. Maybe I’m stretching the definition of math a little bit, but I don’t think so. To me, logic puzzles are math, because you’re using mathematical reasoning. To solve a case, you have to use your mental powers of deduction. This is the same skill set you would use when solving any complicated math problem. Start with you know, organize your thinking, and work forward to find the answer.

As my son will tell you, if something as fun as Detective Club can be considered math, then math can’t be all bad!