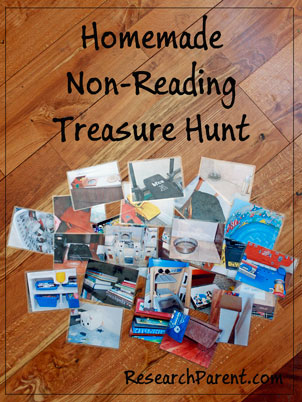 Ever since my first child was a toddler, I’ve thought it would be fun to make a treasure hunt for him, with clues so he could go from one clue to the next until he found the treasure. The only problem was, he couldn’t read. I tried a couple times writing down simple instructions on slips of paper (“the next clue is in your toy box”), but he obviously needed the help of an adult to decipher the instructions. Then I got the idea to make the clues be pictures of different spots in our house (like the toy box), and all of a sudden, he could do the hunt all by himself. I’ve found that kids between the ages of 3 and at least 5 seem to enjoy this activity. The “treasure” we use is either a little box filled with fake money and plastic jewelry as in the Homemade Treasure Map Game or just a hidden toy, like a stuffed animal.

Recommended Age Range: Preschool, Kindergarten
Time Required: ~1 hour the first time to make the material, about 10 minutes to set up the game each time after.
Difficulty: Easy, but slightly involved.
Cost: Less than $5 in used supplies

I originally made about 25 pictures, but I usually only use about 8 per game. To play, I make a stack out of the cards I want to use. The top card is the card that will be handed to the child to start the game. Wherever that card depicts (i.e. under the couch), I place the next card in the stack in that location. The card that is placed in that location (i.e under the couch) will show a picture of another spot in the house. Next, I go to that second location and place the next (third) card. I repeat this process until I place my last card. Wherever that last card depicts is where I hide the treasure. 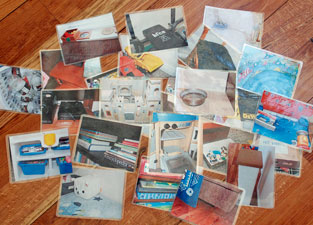