I’ve always loved the idea of chess…an intellectual game that requires strategy, forethought, anticipation, and practice. I’m a complete math nerd. I should be all over chess. However I never learned. Even if I had learned, I didn’t have anyone to play with. Now, ever since reading and watching Harry Potter, my 7 year old has been really eager to learn how to play chess. I’ll admit, at first the idea of teaching him how to play was a little overwhelming. I am so grateful to have found this No Stress Chess game. Now he can even play with this 3 and 5 year old siblings. 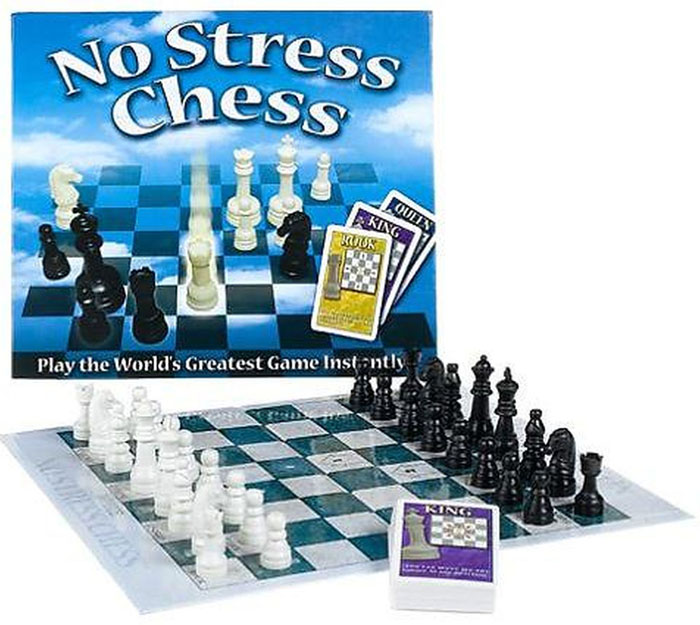 Comments: This game makes it SO EASY to learn how to play chess! To start, if you flip over the standard checkered board, there is a version that has pictures of all the pieces in their starting positions. That makes it such that even my toddler can set up the game independently. After playing about 10 times, my 7 year old had the positions memorized and no longer needed this assistance.

The game includes a deck of cards that have visual and written instructions for the possible moves of each of the pieces. Instead of playing regular chess, kids can start by playing a version where they draw a card and have to move the piece on the card. This is great for multiple reasons. First, they get practice learning the moves of each type of piece. After playing several games this way, they no longer need to use the visual and written descriptions. Second, it takes a lot of the decision-making out of the game. Instead of choosing between all the pieces on the board, the child can only choose from a certain type.

This makes it so that kids of varying ages can play together. At this point, my 7 year old can definitely play real chess, but he wants to play so much, he’ll play either way. He’ll even play with his 3 year old brother. He lets the little guy choose a card and then shows him the (very few) possible moves he has based on that card and lets him move the piece. In this way, the younger child is gaining familiarity and the older child is getting extra practice. I NEVER thought I would see my toddler and second grader playing ANY version of chess together. It’s pretty amazing.