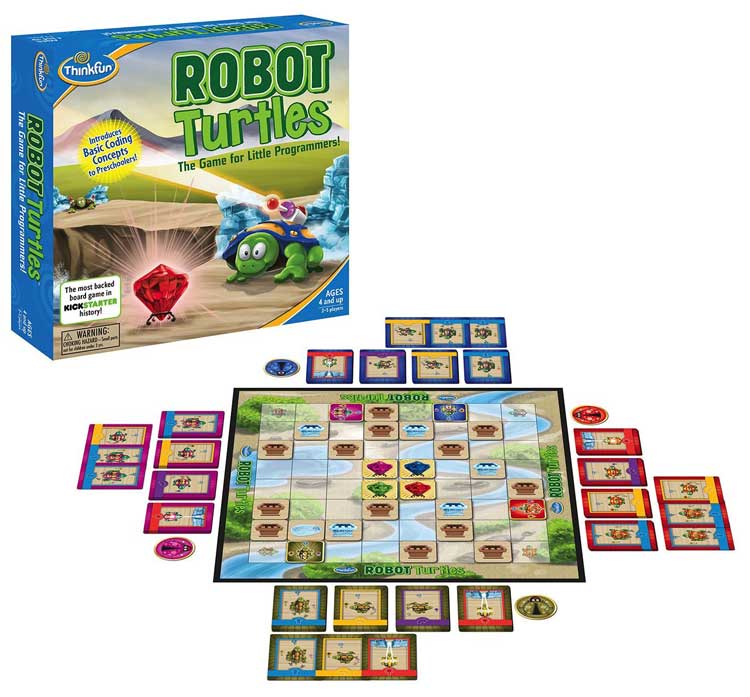 Comments: My 4.5 year old and I are seriously loving this game. When I started college 15 years ago, I knew I wanted to do something math or science-y, but I had trouble deciding exactly what. I dabbled in astronomy, physics, and computer science before eventually settling on mechanical engineering. However, even though I ended up switching majors, I really loved programming. As both an undergraduate and graduate student, I took several “intro to

I can pretty much say that anyone who has taken a beginning computer science class will smile reminiscently when they realize the concept behind this game. Does the game teach kids to program? Absolutely not. (Come on, these are preschoolers we’re talking about!) However, I really do think it helps kids to think more analytically. My son is still struggling with perspective (I have a left turn card, and I know which way is my left, but the turtle is facing me, so which way will he turn if I play this card?), but this game has got him using his brain in new and unfamiliar ways. One really nice aspect is that there are essentially infinite do-overs (infinite opportunities to fix the “bugs” in your code), so he doesn’t get frustrated when he makes a mistake.

Another very interesting aspect of this game that I really like is that I am not playing against my preschooler. He is the turtle master (who “programs” the turtle by telling him which way to go) and I am the turtle mover who executes his instructions while making crazy robot sound effects. Occasionally, we have our 2 year old daughter play against him, which is hilarious, because she plays cards at random causing the turtle to frequently go around in circles and make no progress toward the goal at all, which my son loves. However, if she’s not interested in joining us, my son plays against no one and still has a ton of fun. He sets up the obstacles and navigates his turtle through them (with my turtle-moving help) and is still just as excited when he reaches the goal.

I also love that there are ways for this game to grow with my son. It’s hard to say how long this game will be fun for him, but there are ways to make it more challenging. He could play against someone who offers a little more competition than his toddling sister, which would make him think about reducing the number of necessary moves in order to beat the other player to the goal. There are also special cards for making “functions” which is more advanced than he’s ready for at the moment. I anticipate this game being in our frequent rotation for at least the next 2 or 3 years and will also be a good game to play with his sister when she is a little older.