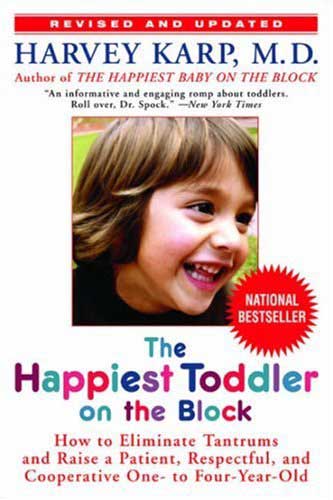 Review: Given how much I liked The Happiest Baby on the Block, I really expected to like the toddler version and was excited to improve my relationship with my toddler using the author’s methods. However, I was really disappointed by this book. I felt like he was capitalizing on the success of the baby version and stretching the same primitive theory that your child is really younger than they seem to toddlers in a way that didn’t necessarily fit.

His main idea is that, evolutionarily, toddlers are more like Neanderthals and cavemen than younger versions of older children. The best way to deal with tantrums, the author suggests, is to speak to them using primitive language that they can understand (what he calls “Toddlerese”). As an example, if your toddler is very angry, because he wants something he can’t have, the author would suggest shouting at the child (mirroring his emotion) something like, “You say, ‘No! No! No! I want! I want! Mine!” To me this just sounds like a phenomenally bad idea.

To be fair, my toddler is extremely well-behaved by toddler standards and in most cases is pretty rational. He has never in his life said such words out loud even if he was thinking them, so I can’t think of any good reason to put those words in his mouth. Maybe this method is more useful on “spirited” children, as the author calls them, but I can’t test that theory.

Speaking of which, I was mildly offended that the author says that parents of spirited children are really the best parents. I will agree that some parents have a tougher time than others based on the genetic predisposition of their child’s temperament. However, as the parent of calm, respectful, non-violent children, I take issue with the idea that parents of out-of-control children are really better parents. If anything, I’ll call it a tie.

The author does have some good ideas which are presented well, such as the “Fast Food Rule” or repeating back to your toddler what he is trying to tell you in order to show you understand. I’m pretty sure I already do this, particularly when other people are around to make sure they understand what my child is saying. However, much of the rest of the advice in this book is not new or interesting. I agree with most of it, disagree with some of it (such as lying to your children), but really didn’t learn anything new or helpful. (Personal Rating: 4/10)