An appealing, fun retelling of the three little pigs for kids that love space or robots. It’s been the number one request from my kindergartner since we checked it out from the library 2 weeks ago. 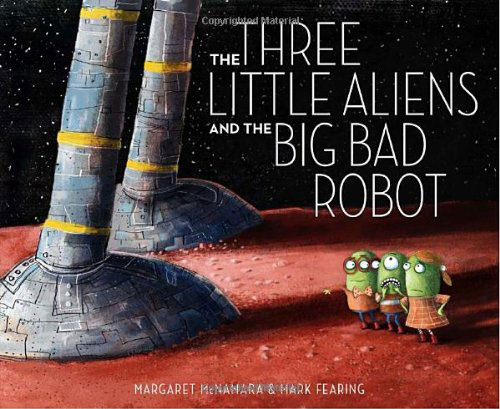 Comments My 5 and half year old can not get enough of this book. Oddly, I remember checking it out for him when he was close to his third birthday and he was terrified of this book. I don’t even think we made it all the way through, because he wanted me to stop. My currently three year old daughter is more or less indifferent to this book, despite having heard it approaching 20 times in the past couple weeks. She doesn’t think it’s the least bit scary, but also doesn’t seem to appreciate the familiarity of the story. The difference in reception of this book I think is party due to their differing personalities, but mostly due to birth order. No matter what you do, second children seem to be destined to become accustomed to “scarier” ideas at a younger age through playing with older kids.

Now that my son is a kindergartner, he thinks this story is hilarious. The first time we read it, it took him until the appearance of the big bad robot to realize the parallel to the Three Little Pigs, but I think he was very proud of himself for figuring it out on his own without me telling him. He also really loves space and likes that he’s able to recognize all the planets.

One fun, though a little confusing aspect of this book is that the third hard-working little alien’s name is impossible to say. The aliens are Bork, Gork, and Nklxwcyz. My husband and I eventually had to agree on a way to pronounce the last alien’s name as our son was bothered by the fact that we didn’t say it the same as each other (or even the same as ourselves from one reading to the next). We’ve come up with Nih-KILL-icks-wick-iz, though obviously the author was just having some fun.

I don’t think all kids will love this book as much as my son does, but if your child likes the story of the three little pigs, space, robots, and bad guys meeting a spectacular demise, this one might be a winner for your kid too.