Every night I ask my kindergarten son, “What do you want to learn about tomorrow?” Nine times out of 10, he says dinosaurs. We’ve been reading lots of library books on dinosaurs, but I wanted to make his learning more hands-on. It took me awhile to put together these dinosaur cards and the associated lap book, but he had a great time working on this project and is SO proud of the result. 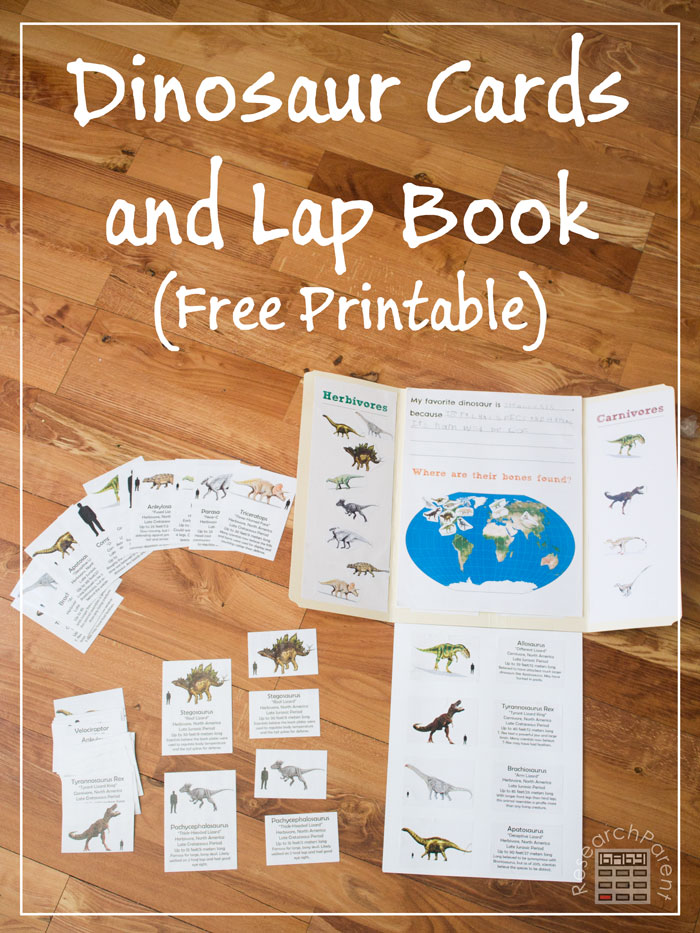 I really enjoy making 3-part cards, because I usually learn a lot in the process of making them. (You’ll find many other sets in the free printables section of this website.) I really wanted my son to get a sense of how big these dinosaurs actually were, so I included a little man on each card for reference.

I’ve never actually made a lap book before. Since I started homeschooling my son a month ago, I’ve come across this concept in a number of places and they look like so much fun. I had no idea that this lap book would end up being so educational as well. Not only did my son learn some facts about dinosaurs, but he also got practice writing and learned a little geography, science, history, and math. 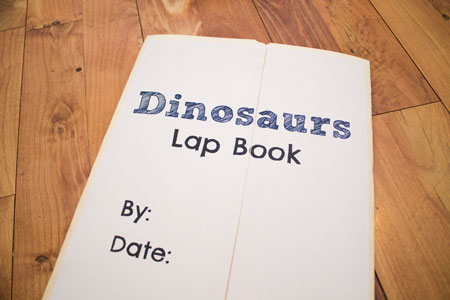 On one of the internal pages, he wrote about his favorite dinosaur, “stegosoris.” He also glued each of the 12 dinosaurs in the set onto the continent where their bones have been found. We choose the 12 dinosaurs to feature in this set together based on his favorites, so I had no idea they would be so North America heavy. However, my son is happy, because now he thinks he might find all these dinosaur bones in our backyard. On the side flaps, we did a little extra science by learning the scientific names for plant-eaters and meat-eaters. 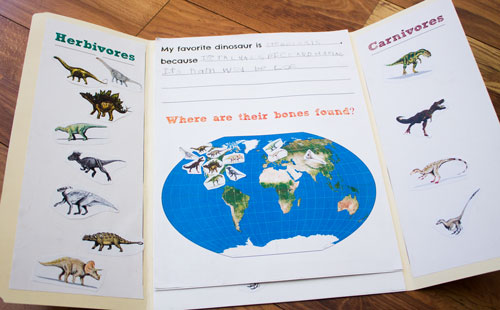 Another activity involved sorting the dinosaurs into their respective time periods. He thought this was interesting, because he had assumed Stegosaurus and T-rex fought each other, but now he understands that didn’t actually happen since they lived at different times. The battles between T-rex and Triceratops, however, are free to rage on in his imagination. (As a side note, if you disagree with the dates in this activity based on your religious beliefs, please see the end of this post for an alternative version of the printable.) 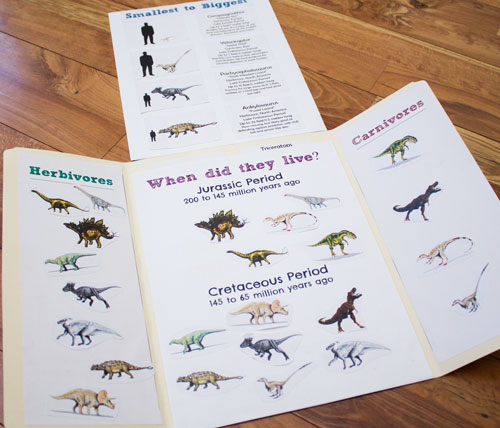 The last activity involved sorting the dinosaurs from smallest to biggest, which took some critical thinking. He needed to consider the perspective of the little reference man in each image to figure out how big the dinosaurs really were. I was surprised that he was able to do this almost entirely on his own. I consider this to be a math activity as it involves mathematical thinking to complete. The other sorting activities (herbivore/carnivore, time periods, and world map) also provided valuable opportunities for him to practice organizing information in different ways, a skill that is important in the study of science. 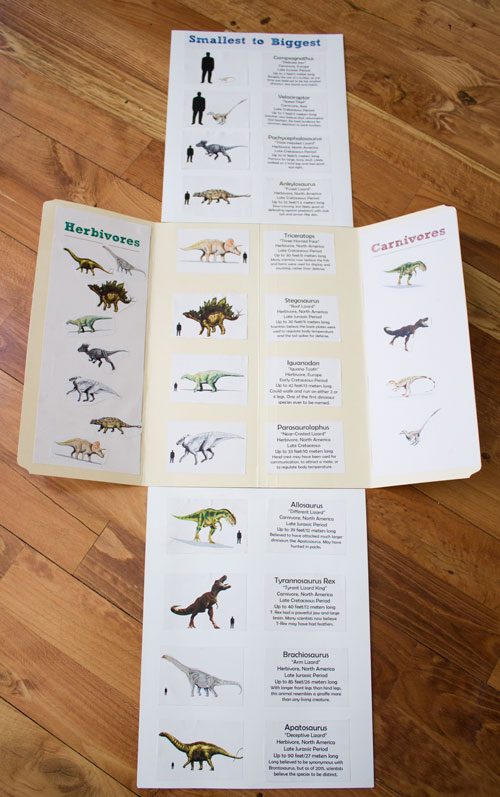 To complete these cards, I used Wikipedia and the National Geographic Kids book called The Ultimate Dino-pedia (Amazon affiliate link). I recommend checking it out from your local library if available.

Recommended Age Range: Preschool, Kindergarten, Elementary
Time Required: 30 minutes to laminate 3-part cards, 30 minutes to get lap book ready for child, about 1-2 hours for child to complete lap book
Difficulty: Easy
Cost: Free printable. Less than $2 in used supplies (even less if you use contact paper instead of laminating pouches to laminate). 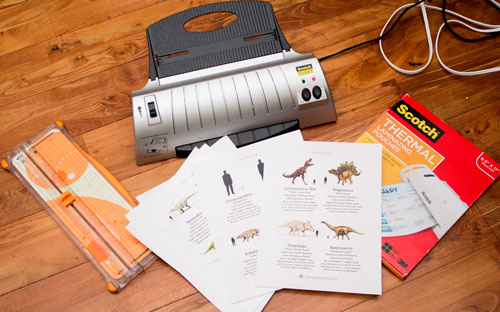 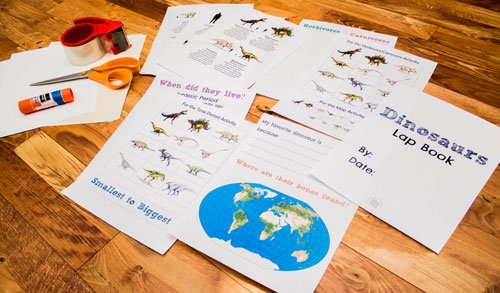 To make the 3-part cards 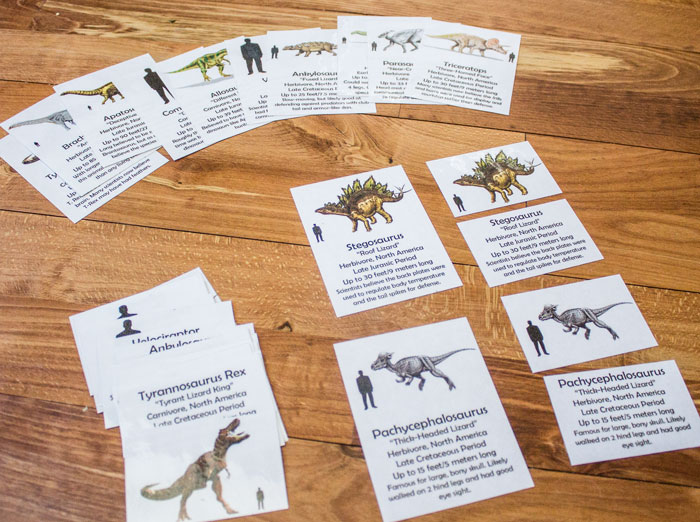 To make the lap book 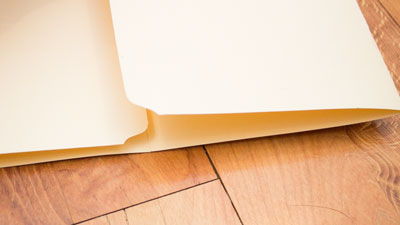 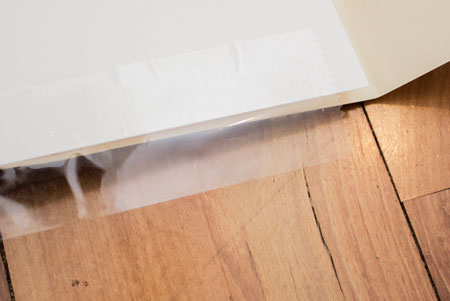 This is what it should look like when they are attached. 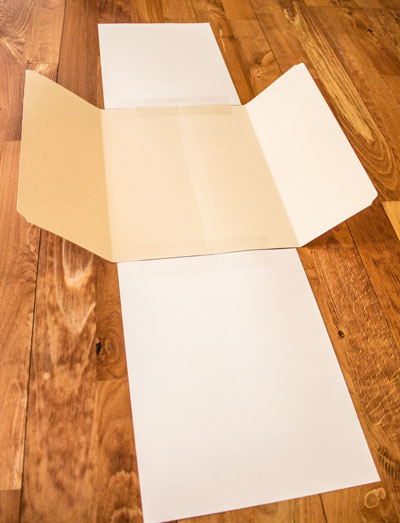 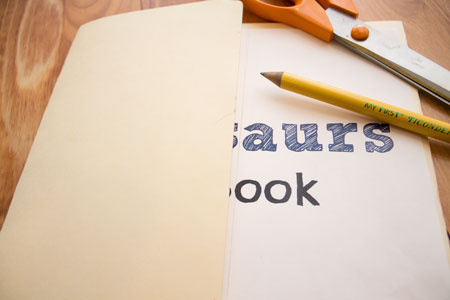 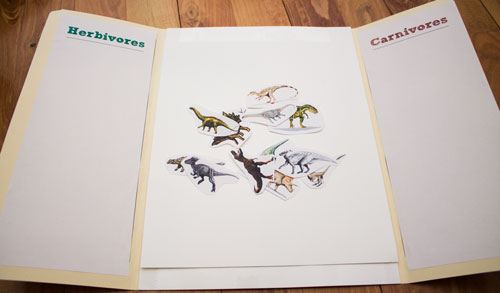 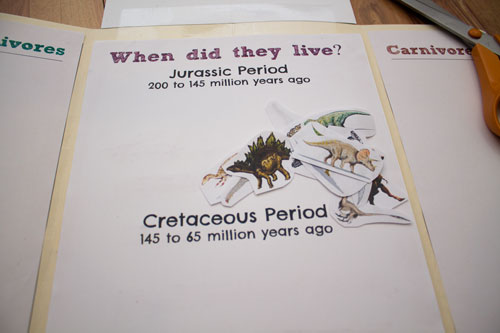 You should have all the pieces cut out and ready to be glued on at this point. (You could also have your child do the cutting, but I knew mine would get super frustrated if I made him do this much work before the work actually started.) 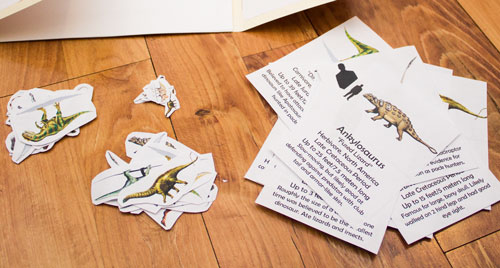 To do the activities in this lap book, I had my kindergartner use the laminated control cards for reference. You can do the activities in any order, but to start, he took all 12 control cards and sorted them by dinosaur size. Once he was done, I showed him how to use the lengths printed on the cards to switch a couple of them, but honestly, a couple of the orderings are a little arbitrary since some of the dinosaurs are slightly taller than longer dinosaurs. 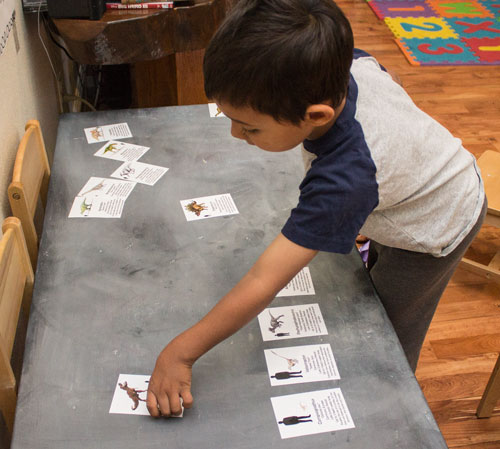 I then helped him glue the dinosaurs onto the inner 3 page length section. 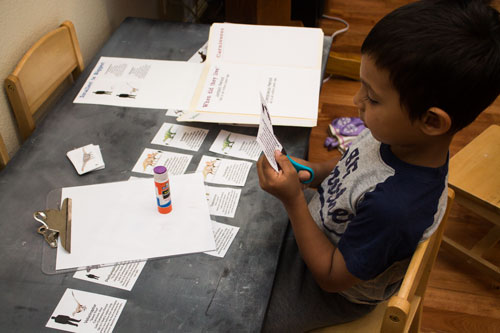 For each of the 3 remaining gluing activities, my son again used the laminated control cards. He’s not reading yet, but I showed him how to recognize the words “carnivore” and “herbivore” and he sorted them into two piles, before gluing the cut out dinosaurs onto the appropriate sides. I also showed him how to recognize “Jurassic” vs. “Cretaceous” so he could sort them by time period and how to read “North America” when he was sorting them into continents. When he found the 3 that were not from North America, I read them for him and helped him find where they went on the map. (In the future, I’d like to do another set, where I specifically look for dinosaurs from other continents.) 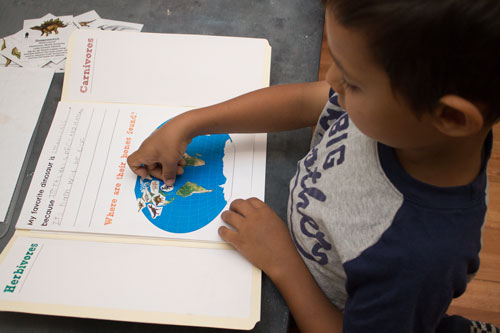 Overall, I think this lap book was a success and I plan on making more lap book templates in the future. My son loves the finished product and couldn’t wait to show his dad when he got home. After all the exposure to these 12 dinosaurs through the various activities, he now recognizes and can name almost all 12 by sight. It’s pretty awesome to hear my 5 year old confidently saying things like “The Pachycephalosaurus is an herbivore.” If you’re interested in future lap books, please consider signing up for my newsletter to be notified when they are available. (You’ll also receive access to a page of subscriber freebies.)

Lastly, as I’ve started my homeschooling journey, I’ve recently come to learn that many of the homeschooling people in my community disagree with the dates that science has come up with to answer questions like, “When did dinosaurs live?” I honestly had no idea that an old Earth/young Earth debate even existed. While personally, I believe that the dates scientists have found are accurate, I want to be respectful of all beliefs. Therefore, I created another version of the lap book that does not specifically mention any dates. It does however still use terms like Jurassic Period and Cretaceous Period. If this goes against your religious beliefs, then I would suggest replacing this page with an activity such as: “Draw and color a backdrop and glue the cut out dinosaurs into your scene. (Volcanoes recommended!)”