My 3 year old really enjoyed this fun, spatial reasoning puzzle game based on a popular fairy tale, but it was not very challenging for my 5 and a half year old. 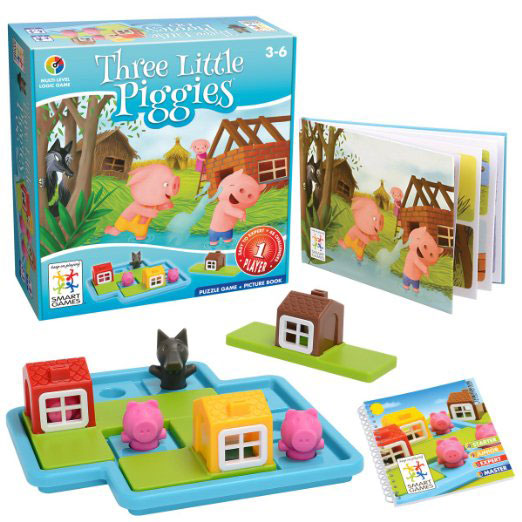 Comments: I bought this game for my daughter who is a couple months shy of 3 and a half. She also has Castle Logix made by the same company for the same age range and Bunny Peek-a-Boo, meant for kids 2 and up by the same company. She was not able to do Bunny Peek-a-Boo at all until she was over 3 and even now, she’s only able to do the starter puzzles. She’s beginning to be able to do Castle Logix, but even the easiest puzzles take her a while to figure out.

This Three Little Piggies game was appealing when I discovered it, because the other games she has feature no story or plotline. She loves the story of the three little pigs, so I thought this game might be easier for her to understand than the others. Maybe she doesn’t understand why I’m asking her to spend time replicating the picture in the other games she has, but she instinctually knows that those little piggies need protecting from that big bad wolf.

We just got the puzzle in the mail today and I think the age range of 3-6 is appropriate on the low end and too high on the upper end. My 3 year old understands what needs to be done and was able to do the first two puzzles by herself (her attention span doesn’t last longer than that). However, they were challenging for her. They each took her between 5 and 10 minutes. After she did two puzzles, we gave her 5 and a half year old brother a turn. This puzzle was way too easy for him. We eventually skipped to the hardest puzzle and he was still able to do it in under 2 minutes.

There are a few things I really liked about this game. First, it comes with a wordless picture book telling the story of the 3 little pigs. Both of my kids really liked the pictures and I was not expecting to find a book in the game, so that was a pleasant surprise. I “read” the book to them by describing what was happening in each picture and they loved it. One of the pictures in particular of the wolf yelling in pain after he kicks the brick house made my kids laugh out loud.

Another thing I like about this game is that after my 3 and 5 year olds were done with their challenges, they spent about 15 minutes playing together with the pieces, essentially acting out the story of the 3 pigs. That was super cute. Another happy surprise was that unlike the other games we have, there are actually 2 different types of challenges. Today we tried the challenge where you have to hide the pigs in their house from the wolf, but there are also puzzles where the goal is to fit the houses on the playing board with the pigs outside their houses. I’m not sure there is as much of a story behind that secondary goal, but it’s nice to have a whole other set of challenges.

I do have one complaint regarding this game. I think it would have been better if they had made the 3 pigs and the wolf just a tiny bit bigger so that they would fit more snugly in the board. They have a rubbery feel, so I think it would have been possible to make it so you had to shove them into their holes, but as it is, they are pretty easy to knock over. This is not a problem at all for my 5 year old. However, my 3 year old seems to solve these puzzles more by trial and error than envisioning where each piece should go. Since I was right next to her to help her, I could fix the pieces every time she knocked them over, but she would not be able to play this game entirely by herself as the pieces needs to be fixed every 20 seconds or so. As she gets older, this will be less of an issue.

Overall, I think this is a great puzzle game for a mid to late 3 or early 4 year old. It gets the child thinking critically and using their spatial reasoning skills. It’s also self-motivating since it’s based on a popular fairy tale so it’s great for encouraging the child to not give up in the face of difficulty. The story book and the little toy pieces which are fun for fantasy play are a nice added bonus.