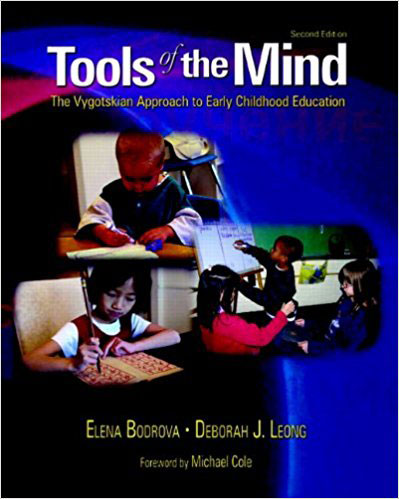 Review: I bought this book because one of the chapers in the book, Nurture Shock, praised the success of preschools which were operated using the “Tools of the Mind” methods. I have to say, I really think there’s a lot of value in this approach and the book was very informative. However, as it’s written more like a textbook than a parenting book, I don’t think it’s for everyone.

I highly recommend it to anyone running a preschool or deeply interested in early childhood education, but not to the average parent. The big psychological and child development idea attributed to Vygotsky is the Zone of Proximal Development. Basically, this says that rather than only evaluating what a child can do independently, it’s important to examine and understand what they can do with varying levels of assistance. Teachers can “scaffold” the learning experience in order to help the child achieve higher levels of development.

For example, maybe two children are both unable to walk on a beam. However by allowing the child to hold an adult’s hand, it might become apparent that one can gracefully walk across with minimal assistance while the other clutches the hand and walks slowly across.

Personally, I am very interested in the Montessori method, since my son attends a Montessori preschool, and there seem to be a number of similarities between the two approaches. They both seem to think children learn best in a hands-on environment in which they are able to do work that is self-correcting. Neither Vygotsky or Montessori seem to think grades are beneficial and believed motivation was vital for learning any new skill.

However, while Vygotsky seemed to have similar views as Montessori for the infant/toddler stage and for the school age stage, there is a fascinating difference in the preschool/kindergarten stage. Basically while Montessori seemed to believe that children would forgo fantasy play in order to learn real-life practical skills, Vygotsky placed mature make-believe play as the leading activity in this age range.

Vygotsky believed it helps kids on a number of different levels (i.e. intellectually, socially, and emotionally). He also believed fantasy play was crucial for helping them develop their own self-regulation and that children are able to behave above their own maturity level when participating in a make-believe scenario.

Montessori believed it was possible for children to develop a long attention span using only the Montessori material, but Vygotsky promoted another way of attaining this focus through play. Personally, I tend to find Vygotsky’s approach more compelling than Montessori’s.

Another way Vygotsky and Montessori differ is in the use of language and assistance. From what I’ve observed and read, Montessori classrooms tend to show rather than describe how to do something new, then leave the child to examine and figure things out on their own with very little interruption.

In addition to discussion on the Vygotsky approach itself and on each of the age groups independently, there is a very interesting middle section that discusses “Strategies for Development and Learning”. The three tactics described are mediators, language, and shared activity. I found these sections to be really interesting, especially the section on mediators.

The author talks about how children can use actual physical tools (things they can see or hold) to help them advance to a higher level. Once they are able to function well with the mediator, the mediator can be removed. An example would be using fingers to count, or a special mat to sit on at storytime to remember to keep your hands to yourself, or a little card with their name written on it to look at as they learn to independently write their name.

In all three sections there are extremely simple ideas that seem like they might be really helpful in teaching kids not only academic skills, but more importantly, how to regulate themselves. (Personal Rating: 8/10)