I think my kids and I could spend an entire year studying Ancient Egypt. There is so much fascinating history to be discovered. Be sure to check my Ancient History page for free printable learning material and activities! 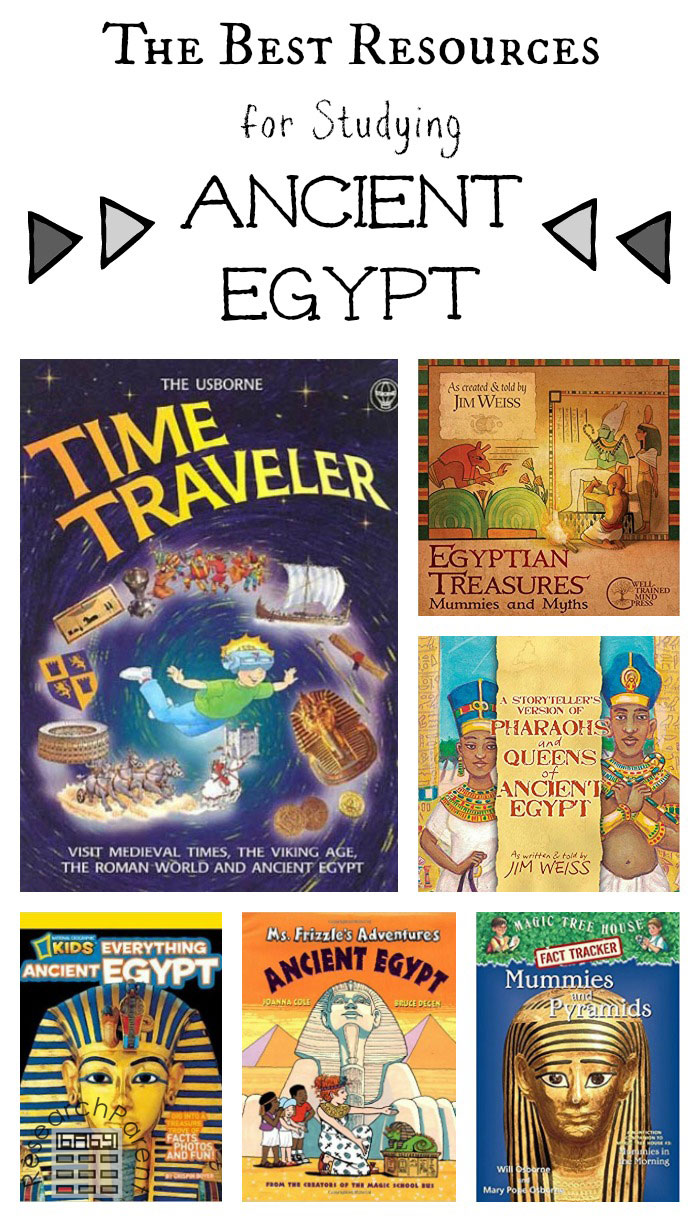 Here are some books, audio CDs and other resources that we particularly enjoyed when studying Ancient Egypt. Please note that my kids are in elementary school. I’m a big fan of using resources aimed at younger children for introducing even MYSELF to new topics, but if you have a middle schooler or high schooler, you will probably want to explore more grown-up texts as well. As my kids get older and I discover more awesome resources, I will be sure to add them to this page!

Also, you will obviously not need ALL these resources! Even if you’re only able to find 2 or 3 of these books though your local library system, you should have more than enough material to thoroughly become immersed in Ancient Egypt.

This book only covers 4 subjects (Knights & Castles, Vikings, Ancient Rome, and Ancient Egypt), but it does those subjects EXTREMELY WELL. My kids and I all find this book fascinating. There are over 30 pages dedicated to Ancient Egypt. It is, by far, my go to resource when learning about this period in time.

If you’ve ever seen a Where’s Waldo book, it’s a little like that. There are pictures of scenes such as traveling on the Nile River, visiting a temple in Ancient Egypt, being in the Pharaoh’s court, and many, many more. Each scene is filled tiny people doing interesting things. My kids will stare and stare and ask about all the details they see. Everything is labeled, so it is easy to answer their questions.

The premise of this book is that you are a time traveler with a magic helmet that transports you back in time. Each time you go back in history, there is a family that you will meet and follow as you learn about that time period. This makes it extra fun for the kids, because for each page, not only are the they just absorbing all the details, but they are specifically trying to find the members of that family. For example, in Ancient Egypt, the family includes a 10 year old son named Hori and an 8 year old daughter named Meu.

Just FYI, there are some details in this book which all families might not be comfortable with. Personally, I didn’t have a problem with any of it (remember, the people are typically portrayed smaller than your fingernail), but there are some depictions of violence/death (particularly in battle scenes), slavery, and nudity. In the Roman bath scene there are quite a few bums out which my kids found immensely entertaining. I’m not able to find it at the moment, but I believe there may also have been a miniscule person sitting on a toilet (which my kids, of course, had no trouble finding). 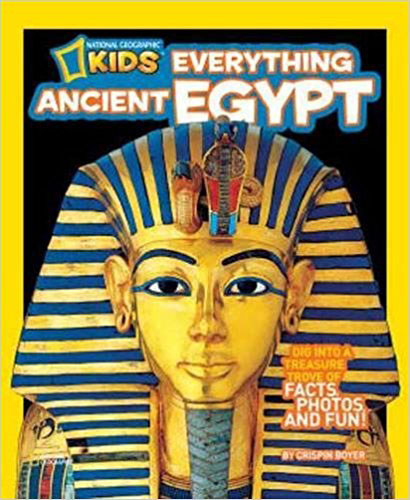 This book has a target age of 8 to 12 years old. Since my kids are mostly younger than that, we primarily just used this book for the pictures. There are SO MANY cool photographs in this book (including several of mummies and skeletons which might be a little creepy for some kids). The text is obviously sophisticated enough for a later elementary or middle school child, so for the most part, we just skipped over a lot of it with my young kids.

The book is divided into 4 sections: Land of the Pharaohs, Death and the Afterlife, Life in Ancient Egypt, and Fun with Ancient Egypt. The last section has pages called Write Like an Egyptian, Play Like and Egyptian, and Draw Like an Egyptian which have fun activities even for younger kids, like making your own cartouche or playing Egyptian tug-of-war.

Another great feature of this book is that our library system had several copies. It’s always great when I don’t have to buy a book I really want o use! 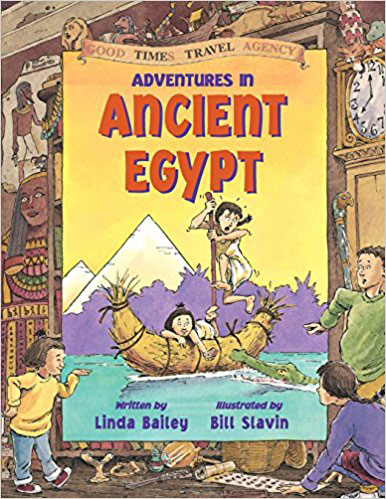 I’m a big fan of the Charlotte Mason living book philosophy of learning. Unlike a text book, which often present factual information in a dry, unemotional style, living books draw the reader in. Although I’m not expert, I think this book qualifies as a living book. It is about 3 siblings who go into a mysterious travel agency with magical books and find themselves in Ancient Egypt.

There are story elements, such as conflict, as well as characters with a wide variety of emotions, all tied in with a lot of factual information about Ancient Egypt. It is illustrated in a comic book style with panels and lots of word bubbles. The concept was a little advanced for my preschool through early elementary aged kids, but I think it would be perfect for kids in mid to late elementary. 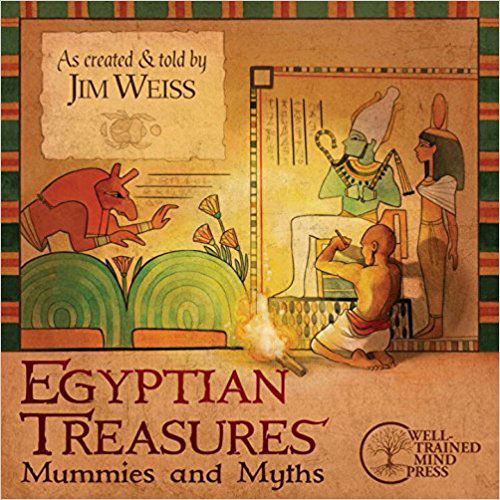 My kids and I LOVE Jim Weiss. It doesn’t even matter what kind of story he’s telling. You say, “Jim Weiss.” We say, “Yes, please.” Even my infant and 3 year old are typically quiet in the car when we’re listening to him. We own about 15 of his CDs and re-listen to them regularly in the car. Unforunately, I’ve recommended him to several friends and I’ve learned he’s not for everyone. Some people seem to think he’s boring, so take my recommendation with a grain of salt. Personally, I think you should give him a try!

This particular CD is great if you’re studying Egyptian mythology. (If you are, be sure to check out my free, printable Ancient Egyptian Mythology cards.) The first two stories are feature some of the most well-known Ancient Egyptian gods such as Osiris, Set, and Isis. The last two stories are great if you have a budding archaeologist, as they deal with grave robbers and the discovery of the tomb of Ramses the Great.

There is ANOTHER Jim Weiss CD about ancient Egypt called, A Storyteller’s Version of Pharaohs and Queens of Ancient Egypt. That one is on my wishlist, but not in our library, so I can’t recommend it yet. However, I’m willing to bet that once we get it, I will be adding it to this list as well.

Everyday Life in the Ancient World 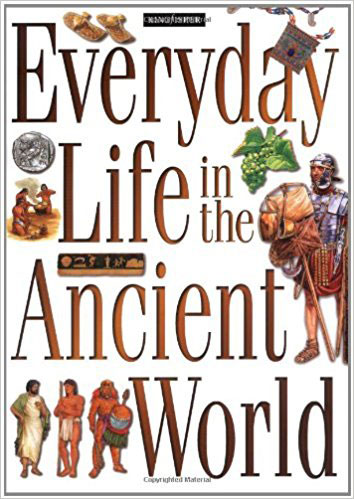 This is another book that only deals with few topics (Ancient Egypt, Ancient Greece, Ancient Rome, and Aztecs & Incas), but does a very thorough job at covering those subjects. Like the Time Traveler, it has a LOT of illustrations, which are great for really bringing the subject to life. I do not like it as much as the Time Traveler, but it’s still a very thorough, enjoyable book and spends nearly 30 pages just on Ancient Egypt.

Pages include topics like What to Wear, Food & Drink, and Accommodations. The whole thing is written in the style of a travel guide and highlights many “attractions” such as the pyramids or Karnak. It includes sentences like, “If you are on a tight budget, why not stay out of town? Tomb workers’ village houses are simple, but excellent value.” I understand that the authors wrote the book in this way for entertainment value, but I think it goes over the heads of my children (the oldest is in 2nd grade), and personally I find it mildly off-putting. However, there is still a ton of information in here. If your library has a copy, I definitely recommend checking it out! 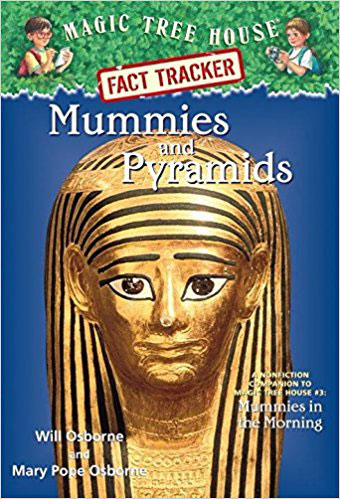 My oldest is only 8 and I think this book is too advanced for him, but if I were to read it out loud to him, I know he would understand it all. What I love about this book is that it’s clearly aimed at early independent readers. The text is made as simple as possible without sacrificing any of the super cool information about Ancient Egypt.

None of my kids have gotten into the Magic Tree House series yet, but I love the concept. This book is the nonfiction companion to the book Mummies in the Morning (which I think my son could read). One of the awesome things about being a homeschooling family is that we have time in our lives to go down rabbit holes and let our kids explore and pursue their interests on their own time. If my son were to become super interested in Ancient Egypt in a year or two, I think this would be the perfect book to put into his hands. 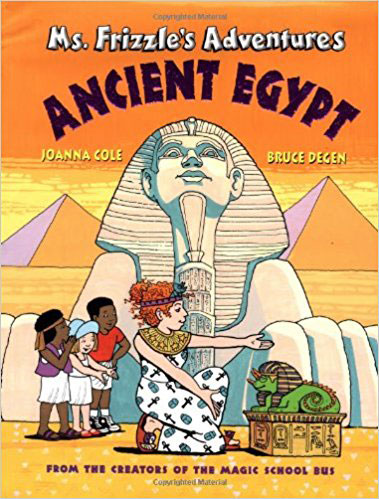 My young kids are HUGE fans of the Magic School Bus (both the old and new versions). I LOVE the idea of using the science book/show series to explore history as well. This was a wonderful book for studying Ancient Egypt with my kindergarten-aged kids. The story is told in the first person from Ms. Frizzle’s point of view, the images have a comic book style, and the text is very simple, which makes it engaging and easy to understand for little listeners.

There is a lot of information and even some interesting facts that we didn’t find in other books (like that their teeth were worn down by sand that blew into their bread). Overall, this book was a great way to get my littlest kids thinking about Ancient Egypt. The only caveat is that my 2nd grader now feels like Magic School Bus is too baby-ish, so it’s probably best for just the young set.

Usborne Encyclopedia of the Ancient World 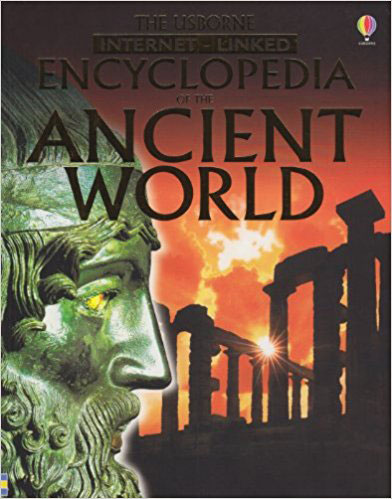 I’m pretty sure this book is actually a compilation of 4 other Usborne books on Ancient Mesopotamia, Egypt, Greece, and Rome. It doesn’t really cover other areas of ancient history, but it covers those 4 areas very well. There is nearly 100 pages devoted to Ancient Egypt in this book. If you would really like to have supplemental material for all the free printable cards, I’ve made on Ancient Egypt, this would be a good resource to have as it includes basically everything that I put into my cards.

What I like about this book is that it includes a nice mixture of illustrations and photographs. It is definitely a textbook and not a “living book.” I did not read all the information to my own kids, who are still fairly young, but rather just looked through the pictures. However, the language is simple enough that I think if I had read it to them, they would have understood a great deal. I think by the time a child is in fourth grade, they would be able to read this book independently. 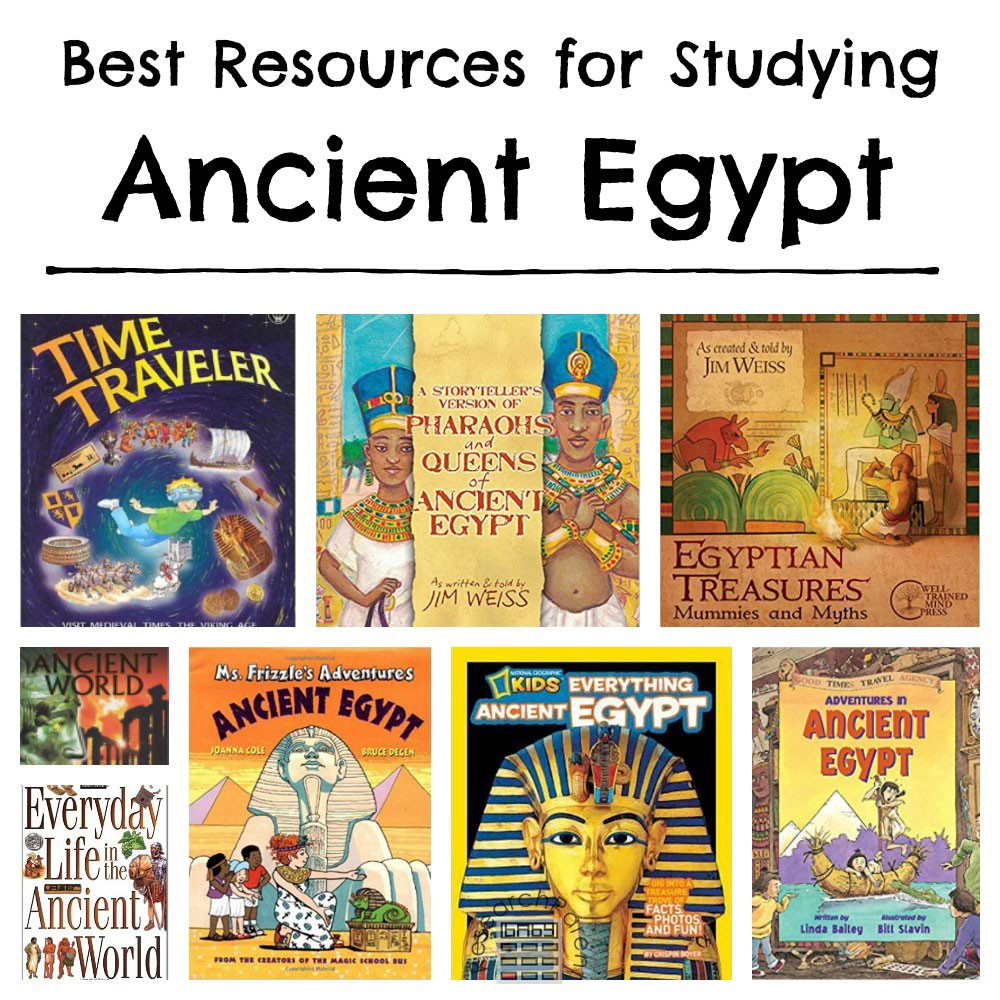