My 3 year old and I sometimes have issues. Yes, I know…if I can’t get along with a 3 year old, it probably says more about my maturity level than it does about his. However, I have to say that this game (Ruckus Jr.) is really helping our relationship. 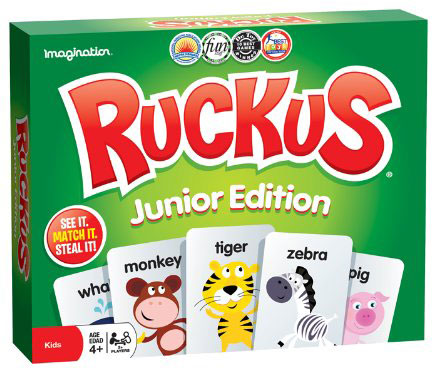 Review: I homeschool my kindergartner and 2nd grader. We interact all day long. I have a 1 year old as well, so obviously he requires a fair bit of attention. Sometimes my 3 year old gets a little lost in the shuffle. Occasionally I make time to try to connect with him one on one, but a lot of the time I feel like my efforts fall flat.

Around Christmas, I was looking for games that we could play as a family without excluding the 3 year old. Ruckus Junior is absolutely perfect. It’s really fun, the rules are super easy to understand, and best of all, it is easily modified to make it based entirely on luck, so the 3 year old actually has a shot of beating his older siblings and parents.

We opened up the Ruckus Junior box and it took about 2 minutes for me to figure out how to play. Setup? Deal each person 7 cards and make a draw pile. Lay down any sets of 2 or more matching cards in front of you. Game play? If you have a card in your hand that matches a set an opponent has in front of them, you can steal their set. When no one can play, everyone gets a new card.

To make this easier for my 3 year old, we modified the game so that all the players take turns like a standard card game. On your turn, if you can steal, you do it. If you can’t, you begin your turn by drawing a card (and then seeing if you can steal or add to a set you already have). It’s not quite the same as the makers intended, but with this change, which removes the speed element, the 3 year old absolutely has a chance to win.

A couple week ago, my husband took the older kids skiing for the day. When the 1 year old went down for his nap, I really wanted to make an effort to do something fun with the 3 year old. I almost never have an opportunity to do something with him alone (especially not without constant interruptions).

The joy on my 3 year old’s face the first time he and I played this game was absolutely priceless. Each time he was able to take one of my sets, he would practically burst from happiness. In contrast, each time I stole one of his sets, he would get a sad, pouty look on his face, but he wouldn’t cry. All in all, I think it was good practice for being a good sport and learning the all important game playing concept of: “you win some, you lose some.”

Since that day, I’ve played with him alone one more time, which was just as fun, and we’ve played as a family 3 times. My family has gotten better at playing it each time. I will say that it’s one thing for a child to get their set taken by a parent, but it’s an entirely different level of agony to have a sibling steal their set. The first time we played, we had to stop so my biggest kids could have a lesson in sportsmanship. However, the more we play, the better they get at being gracious losers, and the more fun we have.

This is definitely a game I’ll keep in my game closet for a long, long time. I assume one day we’ll graduate to the non-junior version of Ruckus, but I may even still save this version with the friendly cartoon animals for my grandkids. It takes up barely any space and it’s so much fun!