This is a fun single-player game great for 5 and 6 year olds that helps kids learn how to manage their frustration and persevere in the face of difficulty. 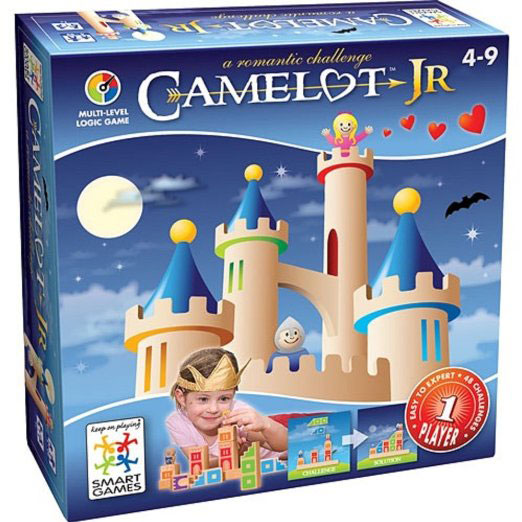 Comments: My son received this about a month before his fifth birthday and LOVED it. He was able to do the first several challenges without a lot of difficulty and felt extremely proud of himself every time he figured out a puzzle. However, once he’d completed the “starter” puzzles (there are 12), he got stuck on the first “junior” puzzle which has 3 pieces to manipulate instead of 2 like the puzzles before. He got so frustrated that we put the game away for a couple months.

When he was a little over 5, we tried again and he enjoyed it until he got to about Puzzle 21 which requires you to put one of the staircases such that the stairs are on the underside. He really couldn’t figure out the trick and I was determined not to give him a hint. At that point, the game started causing him more grief than enjoyment, so we put it away again. Now he’s 5 and a half and we just brought it out for a third time. He can make it through Puzzle 24 (the last of the “junior” puzzles), but gets stuck on the first “expert” puzzle.

What I love about this puzzle game is that it really does progress very gradually in difficulty. At any point in the booklet, if a child can do a puzzle, he can almost certainly do all the puzzles that come before it, but might have difficulty with the ones that come later. I feel like this really motivates the child to keep trying. It encourages them to work a little harder and a little longer than they might otherwise, because their confidence is boosted by their previous success. I’ve made the decision not to help my son when he experiences difficulty, because I want him to fully experience the pride in his own success once he figures it out on his own, but I’ve definitely thought about giving hints.

So far we’ve found that if we just put it away for awhile and come back to it, the added age and wisdom (and patience) provided by the little bit of extra time is enough to allow him to get farther through the booklet. In my opinion, the frustration that my son experiences when he reaches his limit is beneficial. It gives us the opportunity to talk about how working on things that are challenging is good for your brain. He may be frustrated, but I can compare working on something challenging to doing difficult exercises. Push-ups are hard, but they make our muscles stronger. Puzzles like this game are hard, but they make our brain stronger. If everything were easy, like he wants it to be, we would never get any better. He’s only 5 and a half, but he seems to sort of understand my point, which makes him less frustrated. This time, instead of getting mad, he asked to put it away after working really hard on Puzzle 25 for about 20 minutes. He knows that he can’t do it yet, but understands that he will be able to when he’s a little older.

I know we are going to get a lot of use out of this game. So far my son has completed exactly half the booklet (the easier half, obviously) and I can’t even count how many hours he’s spent on it. I love that it has a “story” to make it more engaging in that you are supposed to build a path for the princess and knight to find each other. Because of the human element, my 3 and a half year old likes playing with it as well, though I haven’t tried giving her any of the puzzles to solve yet. My guess is that she might be able to do the first 2, but would get stuck on Puzzle 3.

I still think overall, if someone were to only buy one independent, puzzle/challenge game for their child between the ages of 4 and 6, I would recommend Rush Hour Jr. I love the way the pieces move and the fact that there’s also a tangible goal (to get the ice cream truck out of the parking lot), but Camelot Jr. is a lot of fun too and may actually provide more hours of play per dollar spent than Rush Hour Jr.