This book, which my two-year-old received for Christmas, has become an unexpected toddler favorite in our house. In the past few weeks, it has helped him master opposites and shapes. He’s even starting to recognize numbers and letters. Rather than being boring, he requests it at bedtime every. single. night. 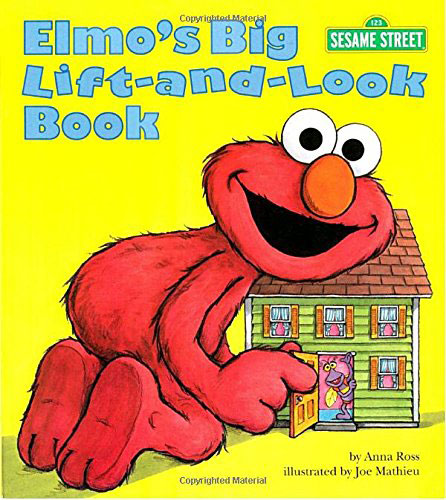 Comments: My 2 and a half year old LOVES Elmo. Even though he’s been potty-trained for months, Elmo Potty Time is still his absolute favorite thing to watch. Prior to this book, a discontinued, super old Elmo board book about fruit salad was his favorite bedtime book.

He loves Elmo so much, he got TWO talking Elmos for Christmas. I’m sorry to report that since Christmas he’s barely touched either one. However, this Elmo lift-a-flap book is by far the present that has gotten the most attention from him since Christmas. Even though I knew he was going to get it, it wasn’t at all what I expected. First, the book was far larger than I imagined it would be. (My husband points out that I should have read the title.)

Second, I thought it was going to be more “fun”. There is one page where you help Elmo find his teddy which sounds fun. However, oddly, even though there are several flaps on the page, the teddy bear is in plain sight. Go figure. This is my son’s least liked page.

Third, I didn’t realize it would be so educational. In addition to the find-the-teddy page, there are specifically double-page spreads on numbers, letters, shapes, and opposites. I thought he knew all his shapes already, but it turns out I couldn’t have been more wrong. However, with the exception of an occasional triangle/rectangle mix-up, he’s now got them all figured out, including ones like octagon and diamond. I was surprised how quickly he learned all the opposites. Even on the numbers page, he’s doing really well. I have to give him a clue like, “Do you remember where the 9 bottles are?”, but with that, he’ll go straight to the number 9 flap.

Letters are going to take awhile longer, but he still loves to flip all the letter flaps and talk about what’s inside. The greatest part is that he is just NOT getting tired of this book. I would say even now, weeks after Christmas, this is still his bedtime pick 6 nights out of 7. I don’t believe in pressuring toddlers to learn academic information, but if they show an enthusiasm, I say take advantage of it! Looking on Amazon, there are lots of other Elmo lift-the-flap books, but after looking at the descriptions, I can’t imagine them being better than this one. I might get him another one or two eventually, but for now I’m going to see how long this obsession lasts.